The multi-talented PC-12, as featured in City A.M.

“The private plane I’m boarding at South London’s Biggin Hill would be ideal for anyone who owns a desert island or alpine ski lodge. It’s a multi-talented Pilatus PC-12 NG. My destination is closer to home but even more exclusive: The Carnegie Club at Scotland’s Skibo Castle.

My pilot, Edwin Brenninkmeyer, who is also Pilatus’s distributor for the British Isles, describes the PC-12 as an SUV of the skies. You can go anywhere and do anything you want with it. It can take off and land in very short distances on unmetalled surfaces such as gravel, snow or, as confirmed when we touched down with barely a bump on the tiny Easter airfield near Tain, grass.

Emerging from the BMW-designed cabin, we’re met with a proper Highlands welcome. A kilted bagpiper giving it a lung-full. The music comes courtesy of David Munro, a friendly farmer and owner of this picturesque airstrip who is such a fan of aviation he doesn’t charge a landing fee. When he “heard a PC-12 was coming he laid out the tartan carpet.

This is the most popular aircraft of its kind because it’s so flexible and cost-effective. Swiss-built, Pilatus is privately-owned and has been trading for nearly 80 years. A lot of their customers are owner-fliers because the PC-12 only requires one pilot, and the luxurious cabin can be arranged with seating for six to ten passengers. The room inside is greater than most medium-sized jets costing twice as much, while its ultra-reliable single turboprop engine is so economical it’s cheaper to take this than fly commercial.” 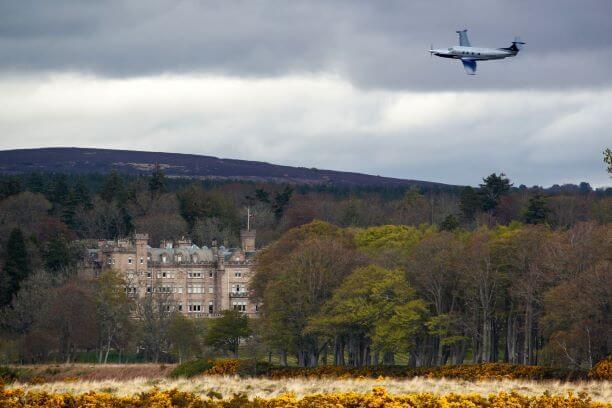